It’s makeover Monday and I have been craving pizza. My favorite pizza is Marcos Pizza, but I can’t afford to fit it in nutritionally because it’s pumpkin spice season. I prefer to allocate my macros towards treat meals with pumpkin spice or candy corn. 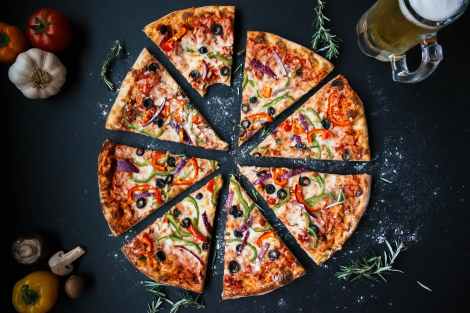 Pizza doesn’t have to be the enemy with a few simple changes. The crust, loads of cheese, and lack of portion size with the toppings help contribute to a slice of pizza being almost 500 hundred calories. What If I told you that you can a serving of pizza for under 300 calories. can be a great way to add vegetables and protein to your meals.

Preheat an oven or toaster oven to broil. ( You can use the microwave too, but it won’t be crispy)

Place the tortilla on a baking sheet covered with aluminium foil and put in the oven for about 3 minutes. (Oven temperatures will vary, so watch your tortilla so it doesn’t burn)

Remove the tortilla from the oven and spread the pizza sauce on majority of the tortilla.

Sprinkle 1/4 cup of mozzarella cheese and your favorite veggies and protein.

Add back under the broiler for about a minute, or you can microwave it for about 45 seconds.

The alternatives to flour crust almost taste like the real thing. I make cauliflower pizza crust when I have the time, and you can add spices, cheese, and butter for a healthier version of pizza crust.

View all posts by CornerofCozy